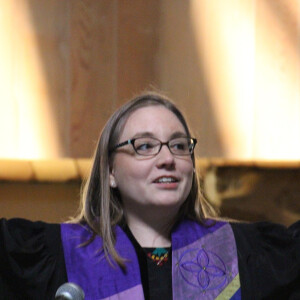 Pastor Emily grew up in Trumbull, Connecticut where her family attended United Congregational Church in Bridgeport, CT - a small, urban congregation who did a great job living into their baptismal promises despite having few children in their midst, and helped Emily hear a call to ministry at a very early age (she dressed up as a pastor for career day in 3rd grade). When her dad took a new job in the Philadelphia area just before beginning high school, they settled in Berwyn, making her a Conestoga High School graduate! At that time, she and her family began attending St. John’s Presbyterian in Devon, which was her first introduction to Donegal Presbytery.

Emily attended Dickinson College in Carlisle, PA where she double majored in American Studies and World Religion. Immediately following college, she began a 4-year dual degree program at Princeton Theological Seminary. She graduated in 2012 with a Master of Divinity and a Master of Arts in Christian Formation with an emphasis in youth ministry. She was ordained by Donegal Presbytery later that year to serve as transitional pastor for Central Presbyterian Church in Downingtown where she has been both co-pastor and lead pastor over the last 9 years.

In addition to her work at Central, Emily has served part-time as a facilitator for Leader Formation in the Presbytery of Donegal, and has volunteered at both the presbytery, synod, and General Assembly Levels. In Donegal Presbytery she served as chair of the Committee on Preparation for Ministry, as a member and vice-moderator of the Leader Team, and currently as a member of the COM (Connecting our Ministry). She represented Donegal as a commissioner to General Assembly in 2014 and 2018 and was appointed to the General Assembly Special Committee on the Reformed Perspective on Christian Education helping the denomination discern its future for educational ministry in 2017, a committee she now co-chairs and is preparing a final report for the 2022 GA in Louisville.

In-between, Emily received her Level 1 Transitional Ministry training, and began a doctorate at Boston University in 2019. Having now completed all her coursework in the BU School of Theology for the Doctor of Ministry, she is writing her doctoral project for anticipated graduation in Spring 2022. Her research uses adult transformative learning theory to bridge the gaps in the PC(USA) clergy education and preparation process through a presbytery-based peer-learning cohort with a goal of more holistically preparing clergy for the complexities of ministry in a 21st century, post-pandemic church.

Emily lives in Chester Springs with her cat Gemma. When she’s not home, you’ll most likely find her in Northern Virginia where her sister and brother’s family lives with her nieces who are 6 and almost 2.  She loves to cook and bake gluten-free desserts, tend to the container garden on her deck, hike, and get aways with friends to ride rollercoasters, especially in Disney—and maintains that Disney is a great teacher for learning awesome intergenerational ministry, hospitality, and tapping into deep joy.

Home | About Us | Our Staff